The Inaccessible Pinnacle of Sgurr Dearg 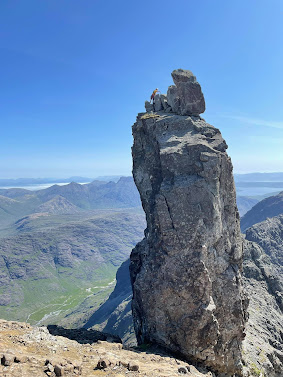 My first two attempts to climb the famous "Inn Pinn" ended in dismal failure. On the first go, we made it to the top of Sgurr Dearg and were taken aback by the enormous queue snaking from the base of the Pinn al the way back to the ridge. We sat for hours in a shelter tent waiting for a go - and then it snowed and our day was over and we trudged back to the Youth Hostel feeling deflated. That is except for the two climbers in our party who managed to defy the queues by shimmying up the front.... The second attempt went even worse, the guide simply said, "it's far too windy, we're not going up' and our day was over before we'd left the campsite. (It got worse for the friend I was with - she drove off with her phone and wallet on top of her car...)

This Christmas, my wife bought me and our eldest son vouchers for a climbing guide - to have another go at the Pinn. Then after looking at the climb online, joined us too. After we grabbed the last patch of available grass in the Glenbrittle campsite, and had a bad night's sleep - we met Tim our guide at the Glenbrittle Mountain Rescue Base at 8AM

He led us up the track which is s straightforward ascent - with one little scramble, all the way up to the point where the Inn Pinn comes into view. Climbers love this stuff - hillwalkers like me draw breath and say things to each other like, "it's very big, isn't it?" It's also very steep, and very exposed. 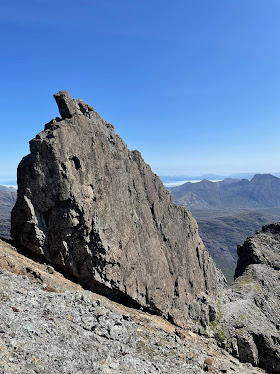 Tim the guide led us down from the ridge to the base of Pinn and talked us through the procedure. My son and I were on the end of his rope. He climbed first up four pitches, and we climbed together to him . About three -quarters of the way up he made us stop hurrying, and take time to look around and soak in the view - the Cuillin, the sea, the cloud inversion over the lochs, the island.. and look down (arrghhh!) - and before we knew it we were on the top - for a simple abseil/lower back to the ridge Then we sat and watched while he took my wife around the same route we had just done.

Exhilarating does not begin to describe the Inaccessible Pinnacle. Doing it on a clear day, with no wind, on dry rock was perfect, and unlike my first trip there it was incredibly quiet, hardly anyone about at all. I'm so glad that I've managed that, and while I dreaded doing it, I equally understand how people get addicted to climbing and push themselves further and further!

The day ended with a swim in a river and then fish and chips at The Inn at Carbost before the long drive home. What a day!

Posted by That Hideous Man at 5:42 pm