Going Back to Church After Lockdown

Last week I did something I have not done in what seems like years. I used to do it regularly, and it felt as natural as a habit that was easier to keep than to break. This time however it was a calculated decision, one I took with slight trepidation and which felt strange and at first a little awkward: - I went to church.

Re-emerging from lockdown has been both liberating and unnerving! I hadn’t realised the extent to which I had been accustomed to social isolation and how hard I would find meeting and chatting to new people. I struggled with singing and realised how much I’d become merely a passive observer of ‘online worship’. Being together with others to worship God was good however – Christianity has always had a deeply communal spirituality and is never a solo-pursuit. During lockdown there are members of that community who have had children, lost loved-ones, married or separated – moved houses or jobs. ‘Being with’, rather than just ‘hearing from’ these folks was significant.

Full normality has not yet returned however. The place reeked of hand-sanitiser; and social distancing imposed unnatural barriers between people who would naturally shake hands, or embrace after a long-time apart.

Then of course, everyone was still required to wear masks. Mask wearing can prevent the spread of potentially infectious droplets; and also ruins a community’s ability to sing together! And mask wearing has been a highly contentious matter in the re-opening of society. That is not least because the inconsistencies in the rules have been glaring and bizarre. Why do a socially-distanced congregation have to mask, but then the nightclub over the road can pack people in for no-distanced, unmasked dancing and mixing? Or more glaring perhaps, why do a wedding party have to cover their faces for the service and then head off to the reception for unmasked ceilidh-dancing? What can explain such double-standards? 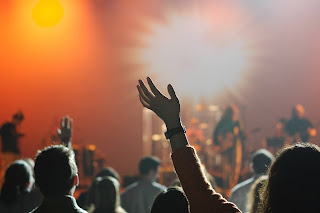 Some Christians have claimed that this is evidence of state hostility to Christianity. Others suggest that the government wrongly assume that while clubs and restaurants are full of the young and healthy; churches only contain the aged and infirm – a stereotype which is as inaccurate as it is unhelpful. My suspicion is that concessions have been granted to the entertainment and hospitality sector (which have not been extended to the churches), for the more simple reason that jobs and tax-receipts rely on allowing these places to provide the best possible experience for their guests.

If that is the reasoning behind the policy, I find it troubling, for Jesus famously said, “You shall not live by bread alone” – and pointed people to live not just materially but spiritually complete lives. That is, he called people to live in the deep connection to God which he came to give us; and in deep community with one another. Such things are of infinitive value but are unquantifiable, and more awkwardly: untaxable. That does not mean that they should be treated with less respect, or unvalued however. Jesus affirmed that while we need our ‘daily bread’ because our physical needs are legitimate; we also need ‘every word that comes from the mouth of God’. (Matthew 4:4). That’s why next week, I’m going back to church again – to hear the word of God preached, to sing and to share community with others. It’s not necessarily the easiest choice but I believe it is the wisest. Our governments might treat this with some contempt, but I suggest that it is in expressed love for God and neighbour that something of infinite value is found.

The doors of Christian communities across Scotland will be open this Sunday, it might be worth a look in – even if it’s been a while.

This article first appeared in The Scotsman, 2/9/21

Posted by That Hideous Man at 9:24 pm